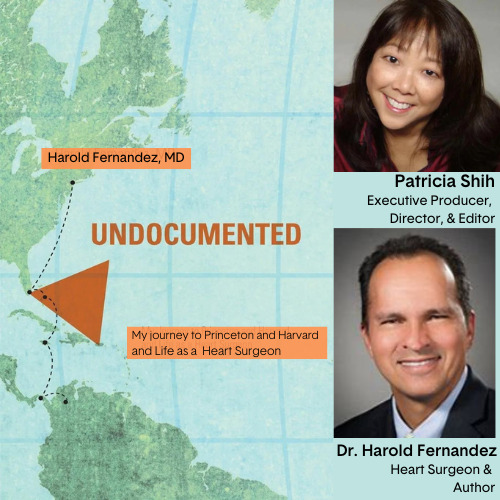 Critics have said, “Possibly the most important film at the present time,” and, “Absolutely sensational! Everyone should see this!”

Patricia Shih’s first film is about a young teen who fled to America from Colombia to join his parents from whom he had been separated for years. A story of loss, struggle, fear, and ultimately triumph as the boy achieves valedictorian, then is accepted to Princeton where his undocumented status gets revealed, and finally Harvard Medical School. He is now a top cardiac surgeon on Long Island. His story is compelling, inspiring, heart-wrenching.

A Q & A follows with the filmmakers and subject, Dr. Harold Fernandez, who will sell and sign copies of his books. 100% of all book sales goes to the Dreamer movement. Ms. Shih will be selling and signing DVDs of the film.

“Dr. Fernandez’s story is emblematic of so many immigrant families seeking an opportunity to live safely, and striving to reach their full potential. The film conveys the love and determination that propelled them to follow their dream. This film needs to be seen far and wide. It has the power to touch hearts and change minds to be more open to different people.”

Harold Fernandez is a leading heart surgeon in New York. He is a professor of cardiothoracic surgery for the Northwell-Hofstra School of Medicine, and the system director of surgical heart failure for Northwell Health. He completed his college education at Princeton, and medical training at Harvard and MIT, followed by residency and fellowship training at NYU Medical Center. He has been ranked as one of the top heart surgeons in NY State by the Department of Health annual statistics. He is the author of two books: Undocumented and A Boy and a Book. He is passionate about immigrants’ rights, healing through whole-food, plant-based nutrition and exercise, and the power of reading and an education to make your dreams a reality. He currently resides in Huntington, New York, with his wife, Sandra, his daughter, Jasmine, and his son, Brandon.

Patricia Shih has been a creative artist in multiple media her entire life, starting at the age of 4 when she won her first art award. At age 15, she signed a recording contract in Washington, D.C., and at 16, Unicorn Records released her first recording. Since then she has made her full-time living in the visual and performing arts, including music and theatre, and most recently in video and filmmaking. Her artistic strengths and creative sensibilities, storytelling experience, and music shine in her music videos and now documentaries. Her first film, “Undocumented,” has been accepted by 13 national and international film festivals to date, winning 16 prizes and honors.

Patricia earned a Bachelor of Fine Arts from The Academy of Art and Lone Mountain College in San Francisco. She has taught fine art for decades on both coasts, co-hosted a twice-daily TV show in New York for a year, recorded 9 CDs, and written two books about music. Honors include a Woman of Distinction award, a Woman Making a Difference honor, a Social Justice Leadership award, and multiple national honors for her recordings, artwork and films.