Born to Jamaican parents in Cuba and raised in Brooklyn, Art Smith became one of the leading jewelry designers of the mid-twentieth century. His talent as an artist was recognized early and resulted in a scholarship to Cooper Union where, as one of only a handful of black students, he majored in sculpture. Smith also took a night class at NYU in jewelry making and struck up a friendship with Winifred Mason, a jewelry designer who became his mentor and he, became her assistant.

Art Smith opened his own shop in 1946, on Cornelia St. in NYC, but, as a gay African American, was subject to harassment and vandalism. He quickly relocated to West Fourth Street just 1/2 block from Washington Square park, the heart of Greenwich Village where he felt welcomed and more at home.The new store was better located and Smith’s career began to take off. Both his business and his social world began to expand. Smith was an active supporter of black and gay civil rights, an avid jazz enthusiast, and a supporter of early black modern dance groups.

Smith began to design jewelry for several avant-garde black dance companies and these commissions encouraged him to design on a grander scale than he might otherwise have done. The theatricality of many of his larger pieces may well reflect this experience. His jewelry was inspired by surrealism, biomorphism (design suggestive of the shape of living organisms) and primitivism.
Of his own work, Smith said:

“A piece of jewelry is in a sense an object that is not complete in itself. Jewelry is a ‘what is it?’ until you relate it to the body. The body is a component in design just as air and space are. Like line, form, and color, the body is a material to work with. It is one of the basic inspirations in creating form.”

Smith received important commissions, for example, he designed a brooch for Eleanor Roosevelt and he made cufflinks for Duke Ellington that incorporated the first notes of Ellington’s famous 1930 song “Mood Indigo.” His work was featured in both Vogue and Harper’s Bazaar.

He was honored with a one-man exhibition in 1969 at New York’s Museum of Contemporary Crafts (now the Museum of Art and Design), and after his death, three other major exhibits were organized celebrating his work, the most important of which, was called “From the Village to Vogue” at the Brooklyn Museum (2008.) 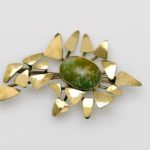 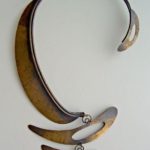 “Patina” necklace inspired by the mobiles of Alexander Calder 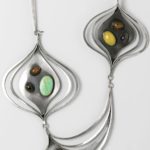 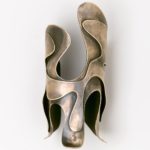