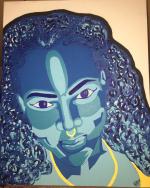 In continued celebration of LGBT pride month, we are focusing on the Stolen Lives Project by Dr. Nichelle Rivers. This art project was created to raise awareness about violence and lack of inclusion toward transgender and gender nonconforming individuals. Dr. Rivers’ Stolen Lives Project is currently on display at South Nassau Unitarian Universalist Church in Freeport.

Dr. Nichelle Rivers, a multi-media artist and educator and social justice activist, is a native of Memphis, Tennessee. Her bold and vibrant depictions are not only inspired by her culturally rich childhood. Her work is also inspired by her love of music and bringing to life spatial relationships and patterns. She likens her need to create art in its many forms to breathing…Simply put, it keeps her sane. 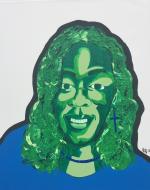 Dr. Nichelle Rivers, Stolen Lives Project (SLP) received funding from the Huntington Arts Council and the Puffin West Foundation to educate and raise awareness to the pervasive violence and lack of inclusion and laws that impact the transgender and gender non-conforming community. Transgender people face extraordinary levels of physical and sexual violence, whether on the streets, at school or work, at home, or at the hands of government officials. More than one in four transgender people have faced a bias-driven assault, and rates are higher for transgender women and trans people of color. There have been over 80 “known” U.S. transgender victims of fatal violence since 2013.

Dr. Rivers journey includes honoring transgender victims of fatal violence by painting a portrait of them and telling their story. She has been posting completed paintings of transgender victims of fatal violence on social media and has an art exhibition of the Stolen Lives Project currently on display through July 7, 2017 at South Nassau Unitarian Universalist Church in Freeport, NY.