Although August Wilson never formally studied playwriting, he has left an indelible mark on the American theater with his ‘Century Cycle,” a groundbreaking group of 10 plays that chronicle the African-American experience through the twentieth century. It’s seems appropriate to remember Wilson at this time, since one of his plays, Fences, recently made into a movie, has been nominated for Academy Awards in the categories of Best Picture, Best Actor, Best Supporting Actress and Best Writing Adapted Screenplay.

This was no small accomplishment for a biracial child born as Frederick August Kittel in Pittsburgh’s equivalent of Harlem, known as the “The Hill.” He was one of six children raised mostly by his African American mother, Daisy Wilson, whose name he eventual adopted. As a teenager Wilson struggled in a series of high schools, the first due to racist bullying, the second because of boredom with an unchallenging curriculum and finally dropping out of the third when accused of plagiarism.

Not wanting to tell his mother that he left school, Wilson went each day to the Carnegie Library of Pittsburgh during school hours and educated himself. He became a voracious reader and also learned to love the blues, discovering the voice of Bessie Smith, who proved to be his muse. He said hearing her sing, “…made me recognize the poetry in the everyday language of black America and gave me the inspiration and freedom to use that language in my own writing.” Wilson would later say,

“I think the Blues is the best literature that we as blacks have created since we’ve been here. I call it our ‘sacred book.’ What I have attempted to do is mine that field, to mine those cultural ideas and attitudes, and to give them to my characters.”

August Wilson’s plays chronicle the African-American experience, each play set in a different decade of the 20th century.

All but one of Wilson’s play describe life in Pittsburgh’s Hill District, the economically depressed neighborhood where Wilson was born and spent his early years. Wilson often said he didn’t write for black or white audiences, but rather about the black experience in America. “And contained within that experience, because it is a human experience,” he said, “are all universalities.”

With the opening of his play “Jitney” this past January, New York City’s Broadway has been home to all of Wilson’s “Century Cycle” as follows: 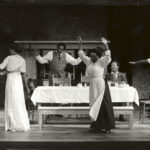 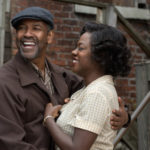 Denzel Washington and Viola Davis in the movie version of Wilson’s “Fences.” 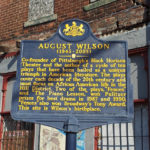 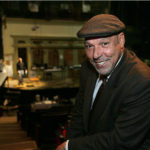 Wilson at the rehearsal of one of his Broadway shows.

The success of August Wilson’s work had a great impact on the careers of actors who got their start in his plays.

As John Lahr, drama critic of the New Yorker, wrote, “His audience appeal single-handedly broke down the wall for other black artists, many of whom would not otherwise be working in the mainstream.” Among them are Angela Bassett, Charles S. Dutton, Rocky Carroll, Viola Davis, Stephen McKinley Henderson, Delroy Lindo, Ruben Santiago-Hudson, and Courtney B. Vance.

Sadly, Wilson died from liver cancer in October of 2005 at age 60. His legacy is an extraordinary collection of plays that gave voice to both the mundane and extraordinary aspects of black life.